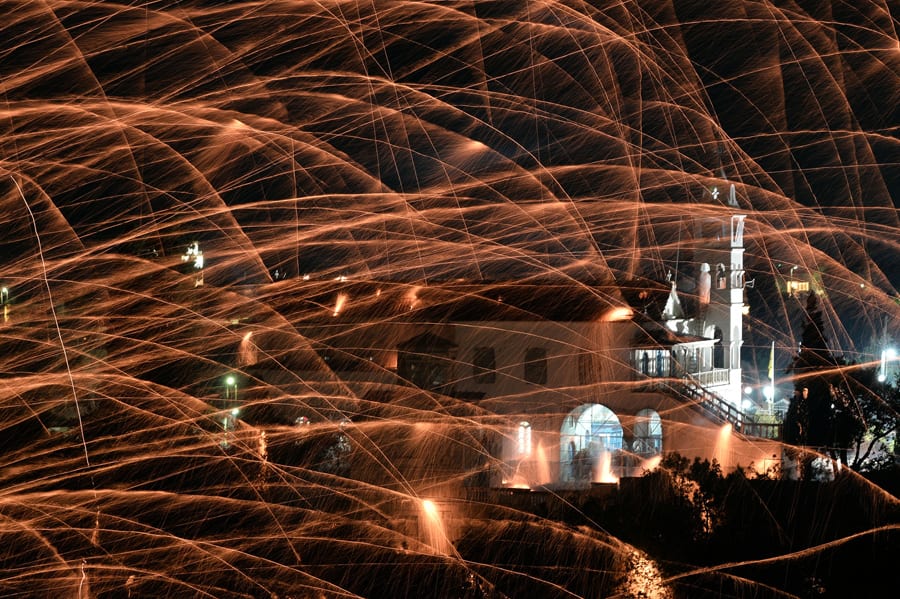 For over a century, members of two rival churches on a Greek island right off the coast of Turkey have annually taken up arms against one another as part of a conflict with uncertain origins. Once the sun goes down on Holy Saturday, the two churches launch more than 100,000 homemade rockets at each other’s bell towers in a tradition the locals call Rouketopolemos.

However, despite its outwardly violent appearance, Rouketopolemos has always been a peaceful tradition in nature. The “rocket war” is a mock conflict staged by both sides in celebration of the resurrection of Christ. While the history of the event is unclear, one theory (that begs to be researched) suggests that the first “rocket war” was a clever ruse employed by the Greeks to distract the Turkish army occupying the island at the time. While explosions dominate the landscape outside, parishioners of each church are able to peacefully attend Easter Mass within.

Fireworks light up the night skies of the Greek village of Vrontados, as the traditional ‘Rocket War’ (Rouketopolemos) Orthodox Easter celebrations commence.

The two rival parishes are St. Mark’s and Panaghia Ereithiani, the respective churches built on two hilltops about 400 meters away from each other. Direct hits on each belfry are supposedly counted on the next day to determine the winner, but each parish invariably claims victory over the other. The result of this apparent disagreement is that both parishes agree to settle the score next year, and the rivalry is thus perpetuated.