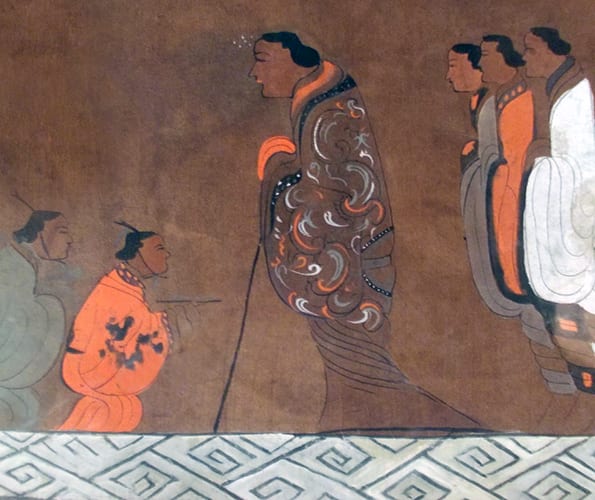 I recently read some studies written about the uniquely preserved (pickled?) body of Xin Zhui found in China. Watch this documentary and think about what type of liquid could have been used to preserve her body.

In 163 BCE, the Marquise of Dai, Xin Zhui (辛追), passed away. She had been the wife of Marquis Li Cang (利蒼), a nobleman who governed an area of 700 households in Changsha, now part of the Hunan Province in central China.

A region with a turbulent history, Changsha had attracted Han Chinese migrants from the north who displaced the locals and cleared forests to plant rice. Lady Dai was around 50 at the time of her death and she had outlived her much older husband and maybe a son. She was carefully entombed by her surviving family, both to demonstrate their respect for her and to ensure that her afterlife would be as much fun as her first one.

Many historians think that people during the Han Dynasty believed that a human had two immaterial parts. The mind or soul, the hun, was believed to leave the body and fly like a bird into the heavens, and the body’s energy, the po, remained with the corpse. The po needed to be cared for like the person had been in life, with food, possessions, and replicas of necessities. These replicas are called mingqi, and can represent furniture, animals, and servants.

THE TOMBS AT THE MOUND

In 1971, workers in Changsha were digging out space for a hospital’s air raid shelter in a hilly area called Mawangdui (马王堆). The work was tough and dangerous, and landslides sometimes interrupted it. The ground felt unstable in one area, so they took a cigarette break before dealing with it, only to find that the sparks from their matches lit up gas seeping from underground. Locals recognized the ghostly blue fireballs as a sign that there was an ancient tomb nearby (decomposing material releases flammable gas), so contacted archaeologists. Under excavation team directors Hou Liang and Zhou Shirong, and with the help of students from local schools, the archaeologists began to carefully excavate the tombs.

The archaeologists claim that someone found a leaf deep under the in mud as they were digging. Despite being as old as the tomb itself, it was still green. It was a sign of what was to come.

The workers had uncovered the three tombs of Mawangdui. The mistakenly named “King Ma’s Mound” was in fact the Li family’s mound. The three tombs contained Xin Zhui and Li Cang, identified by engraved seals, and an unidentified 30-year-old man who may have been their son Li Xi. The men’s tombs were later found to contain wonderful things, and the young man’s tomb contained many classical texts including the I Ching, the Tao Te Ching, and manuscripts on war, medicine, and sex. However, the matriarch’s tomb outdid the other two, and she was the only Li family member who was mummified. Before the two other tombs were excavated, it was thought that she may be an Imperial concubine and that the objects engraved with the name of Dai may have been gifts.

Lady Dai’s massive grave contained over a thousand items, and two-thirds of them were related to food. There were thirty bamboo baskets containing food itself, including exotic things such as locusts, swans, and dogs, as well as foods more familiar to Western taste like pears, soy beans, and pigs. A bowl of sliced lotus roots in liquid was found, but despite how careful the archaeologists were being with the artefacts, the roots dissolved into mush soon after it was opened. Her favourite dishes had been prepared for her too, and were stored with bamboo slips describing the ingredients and preparation. There were hundreds of pieces of red and black lacquerware to eat these meals from. In a sweet, personal touch, some were painted with phrases reminiscent of Alice in Wonderland like “please eat”.

It took a week of work to uncover the body of Xin Zhui, but late one night, they revealed her face. She was pale and withered, but unlike the lotus roots and the silk, she was still solid and she wasn’t going anywhere. Her limbs could be moved, she had eyelashes and fingerprints, and her hair and wig were still on her head. After being buried for two thousand years, her body was undecayed enough to be autopsied like she’d died only days ago. Her organs were nearly in perfect condition, it was possible to discover that her blood type was A and that her last meal included melon because of the seeds in her stomach. Professor Peng Longxiang, who worked on the autopsy, commented that every section of the clinic was involved except the children’s department because she was an adult.

Why was her body preserved so well? No one really knows, but researchers can suggest some factors. Starting from the outside in, the marquise’s tomb was dug deep underground in an inverted pyramid shape. The tomb itself was a huge vault constructed of cypress wood, surrounded with five tons of charcoal. A three-foot thick layer of white kaolin clay was laid on top, before the grave was filled with earth. Inside the vault, Lady Dai’s body was protected by the four sealed coffins and the 20 layers of silk. This complex burial would have ensured that the tomb remained airless and cold to keep bacteria at bay.

The most intriguing possibility is that Lady Dai was intentionally mummified by the fluid found in her coffin. People in the Han Dynasty were interested in the possibility of preserving the dead, and royalty commissioned jade suits in the hope that the jade would do the job. Ancient Chinese texts have also mentioned embalming fluid. Analysis of the burial fluid revealed that it contained acetic acid (an ingredient in vinegar) and alcohol. Both chemicals have preservative properties and could have “pickled” the marquise, but no one can decide if the fluid alone was responsible for the preservation, or if it was even meant to be there. It’s possible that dampness had just seeped into the tomb over the centuries and combined with chemicals from the tomb and soil.

It reminded me of one of China’s favorite springtime snacks “virgin boy eggs”.

China has a long tradition of pickling foods in a variety of liquids. It’s not a big jump from pickling eggs, vegetables, poultry, and fish to pickling people.

What do you think preserved her body so well? What was the liquid in her coffin?