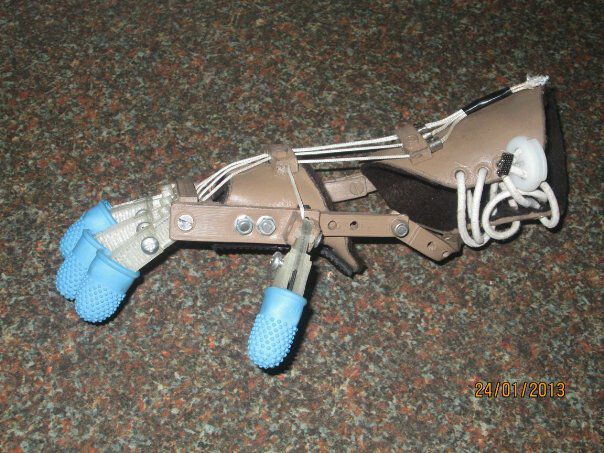 An open-source, lightweight, unpowered prosthetic hand, built for $150 by two hackers separated by continents. Thanks to the device, one of the inventors’ five-year-old son can grasp small objects and hold a basketball, despite being born without fingers.

With 10,000 miles separating them, two makers designed and built a customizable 3-D-printed prosthetic hand for a 5-year old boy named Liam in South Africa for $150 in parts. No power necessary.

The idea for Liam’s hand started out as Rich Van As’s nightmare accident. When Van As, an artisan carpenter, chopped off four of his fingers with a table saw, he vowed to get mechanical replacements. So Van As, in South Africa, researched for months. But only found the X-finger, which costs thousands of dollars. That’s when Van As stumbled on a YouTube video of a velociraptor-like claw made by Ivan Owen, a mechanical special effects artist in Bellingham, WA. Van As tried to replicate the design, but soon realized he needed Owen to “lend me a hand.” And the two swapped ideas over email, a blog, Skype sessions, and finally in person at Van As’s workshop in South Africa over four days in November, 2012.

There are other open source prosthetic ideas, but none quite as developed. The result is a way to blend low-tech mechanics and fast prototyping with 46 parts — sixteen 3-D-printed pieces, 28 off the shelf (which included nylon cord, nuts and bolts, elastic, and rubber thimbles). The 3-D parts were made possible by Makerbot, which donated two 3-D printers, one each for Van As and Owen so they could swap CAD files as they refined the designs.

Two custom-ordered thermoplastic components personalize the fit, so anyone can take the open-source plans and build their own fingers.

“The devices we have made are body powered using whatever function the person has,” Owen wrote in an email to PopSci. Van As’s prosthetic is controlled by pulling on a cam system with what’s left of his original digits to contract the artificial finger.

And that’s how Van As and Owen gave Liam, who was born without fingers on one side, a new right hand in January on Liam’s birthday. Liam can hold a basketball, and even pick up small things like coins by activating his new lightweight hand with a bend of his wrist. The duo wants to raise funds to further develop the Robohand. Owen said the strength of the plastic exceeds human exertion, which means Liam can grow into the Robohand, which in turn can scale larger.

Liam’s mother, Yolandi, wrote to Van As and Owen, that Liam’s “not shy at all to show all his Robohand. His little school he goes to was a huge hit all the teacher’s & kiddies were in awe…”