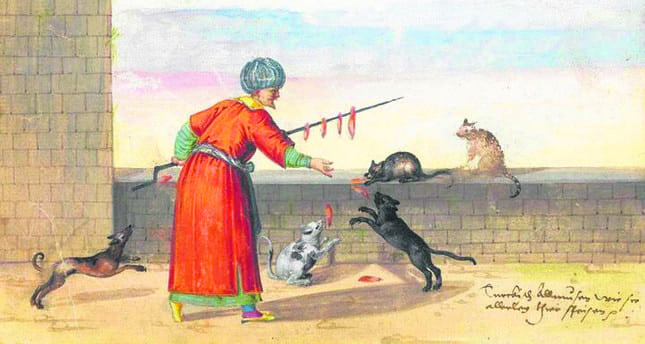 (Above: A painting of an Ottoman feeding street cats and dogs with meat.)

I recently found little 3 kittens playing in my backyard. After a few days, it became clear that they didn’t have a mother to look after them. For about a month now, I’ve been feeding these kittens every morning. I’m, generally, a dog person, but these little guys are winning me over.

There are two types of people in this world: cat people, and not cat people.

And Pope Gregory IX, who held the papacy from 1227 to 1241, most definitely fell in the second camp — largely because he believed that the fluffy hairballs embodied Lucifer himself.

Gregory based his theory on “evidence” from Conrad of Marburg, a papal inquisitor. Apparently, torture produced some pretty convincing confessions from people who worshipped the devil and a black cat.

On June 13, 1233, Gregory issued the Vox in Rama, an official papal decree declaring that Satan was half-cat and sometimes took the form of a cat during Satanic masses. The decree stated: “Thou shalt not suffer a cat to live.”

As I’m sure you guessed, this led to a Europe-wide war on cats. We may still see the effects of the mass cat slaughter today: It’s been suggested that the small black cat population in Europe today is a direct result of that breed being deemed particularly devil-like.

The Black Death, which ravaged Europe in the mid-1300s, was in large-part spread by rats and the fleas on them. Killing off the rats’ main predators was probably not the best idea.

The Church’s hatred of felines didn’t stop with Gregory, however. Pope Innocent VIII came to power in the late 1400s, during the throes of witch hunts in Western Europe. Because the powers that be dictated that the cat composed one of the main identifiers of a witch, the Church officially excommunicated the entire species.

During the same time as the European cat crusades, cats were admired and loved under Islamic rule.

Edward William Lane (1801–1876), a British Orientalist who resided in Cairo, described a cat garden originally endowed by the 13th-century Egyptian sultan Baibars, whose European contemporaries were killing them under papal decrees.

Aside from cats protecting homes, granaries, and food stores from pests, cats were valued by the paper-based Islamic cultures for preying on mice that destroyed books. For that reason, cats are often depicted in paintings alongside Islamic scholars and bibliophiles.

İsmail Saib Sencer (1873-1940), the director of the Bayezid Library in Istanbul, for example, fed hundreds of cats. For this reason, Bayezid Library was called “The Cat Library.”

The American poet and travel author Bayard Taylor (1825–1878) was astonished when he discovered a Syrian cat hospital where cats roamed freely. The institution, in which domestic felines were sheltered and nourished, was funded by a waqf, along with the caretakers’ wages, veterinary care, and cat food.

Similarly, there is a mosque in Damascus called Masjid al-Qitat. “Qitat” means “cats” in Arabic. In 1267, it was donated under Islamic law as a charitable foundation established to protect cats thrown out in the street. This endowment set up 800 years ago in Damascus is still thriving as many cats still gather there to be fed every morning.

According to Islamic tradition, Muezza was the prophet Muhammad’s favorite cat. Muhammad awoke one day to the sounds of the adhan. Preparing to attend prayer, he began to dress; however, he soon discovered his cat Muezza sleeping on the sleeve of his robe. Rather than wake her, he used a pair of scissors to cut the sleeve off, leaving the cat undisturbed.

According to a hadith, the prophet Muhammad said that a woman who kept a cat locked up and failed to feed it until it died, would be sent to hell, while a prostitute, who gave water to a dog that was dying from thirst, would be forgiven.

Following Islamic tradition, a few years ago, a kind Imam in Istanbul decided to open up his mosque to stray cats and kittens so they could eat and safely rest their heads away from the perils of the outdoors.

Imam Mustafa Efe calls the cats “guests” of the mosque, and they’ve made themselves quite at home.

They sit down on the plush carpets as worshippers pray around them, and one cat likes it there so much, she decided to raise her kittens in the building.