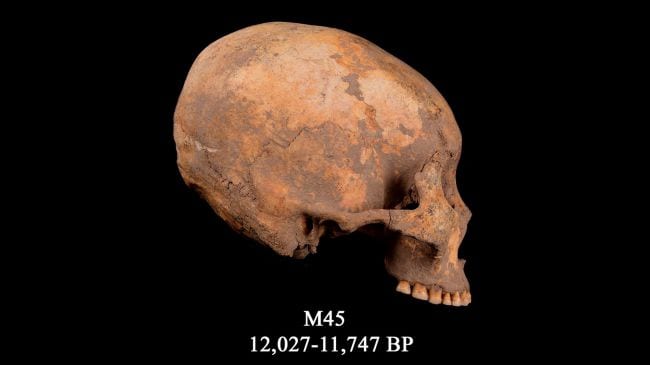 The skull known as M45, the earliest known case of head modification on record. It dates to about 12,000 years ago.

Ancient people in China practiced human head-shaping about 12,000 years ago — meaning they bound some children’s maturing skulls, encouraging the heads to grow into elongated ovals — making them the oldest group on record to purposefully modify the shape their skulls, a new study finds.

Although there is no universal reason for this practice, cranial deformation was probably performed to signify group affiliation, or to demonstrate social status. It could be aimed at creating a skull shape which is aesthetically more pleasing or associated with desirable attributes. For example, in the Nahai-speaking area of Tomman Island and the south south-western Malakulan (Australasia), a person with an elongated head is thought to be more intelligent, of higher status, and closer to the world of the spirits.

Up until late into the 2oth century the Vanuatu people of the Tomman Island still practiced head binding. The process begins approximately a month after birth. “Each day the child’s head was smeared with a burnt paste made from the Navanai-Molo nut (from the candlenut tree). This process softens the skin and prevents ‘binding rash’. The child’s head was then bound with Ne’Enbobosit, a soft bandage made from the inner bark of a type of banana tree. Over this was placed a No’onbat’ar (specially woven basket) made from Nibirip (pandanus) and this was bound around with the Ne’euwver (fiber rope). This process continued every day for approximately six months to produce the required shape.”

In the Americas, the Maya, Inca, and certain tribes of North American natives performed the custom. In North America the practice was especially known among the Chinookan tribes of the Northwest and the Choctaw of the Southeast.

In Africa, the Mangbetu people of the north-east Democratic Republic of the Congo also practiced head elongation. Babies’ heads were bound with cloth to create the desired shape. As adults, the effect was emphasized by wrapping the hair around a woven basket frame so that the head appeared even more elongated.

In some parts of Europe, especially France, head elongation was practiced up until the late 19th century. In the Deux-Sevres area, head elongation involved wrapping the baby’s head in a tight bandage. The binding was left for a period of two to four months and was then replaced with a fitted basket. When the baby was older, the basket was strengthened with metal thread.

While excavating a Neolithic site (the last period of the Stone Age) at Houtaomuga, Jilin province, in northeast China, the archaeologists found 11 elongated skulls — belonging to both males and females and ranging from toddlers to adults — that showed signs of deliberate skull reshaping, also known as intentional cranial modification (ICM).

The earliest suggested examples of cranial modification before this find included the Proto-Neolithic Homo sapiens component (9th millennium BC) from Shanidar Cave in Iraq. The earliest written record of cranial deformation dates to 400 BC in Hippocrates‘ description of the Macrocephali (Long-heads).

If this practice began in East Asia, it likely spread westward to the Middle East, Russia and Europe through the steppes as well as eastward across the Bering land bridge to the Americas.

The Houtaomuga site is a treasure trove, holding burials and artifacts from 12,000 to 5,000 years ago. During an excavation there between 2011 and 2015, archaeologists found the remains of 25 individuals, 19 of which were preserved enough to be studied for ICM. After putting these skulls in a CT scanner, which produced 3D digital images of each specimen, the researchers confirmed that 11 had indisputable signs of skull shaping, such as flattening and elongation of the frontal bone, or forehead.

The oldest ICM skull belonged to an adult male, who lived between 12,027 and 11,747 years ago, according to radiocarbon dating.

Archaeologists have found reshaped human skulls all around the world, from every inhabited continent. But this particular finding, if confirmed, will be the earliest evidence of the intentional head modification, which lasted for 7,000 years at the same site after its first emergence.

It’s unclear why this particular culture practiced skull modification, but it’s possible that fertility, social status and beauty could be factors. The people with ICM buried at Houtaomuga were likely from a privileged class, as these individuals tended to have grave goods and funeral decorations.

Even though the Houtaomuga man is the oldest known case of ICM in history, it’s a mystery whether other known instances of ICM spread from this group, or whether they arose independently of one another.

It is still too early to claim intentional cranial modification first emerged in East Asia and spread elsewhere; it may have originated independently in different places.

The study was published online June 25 in the American Journal of Physical Anthropology.