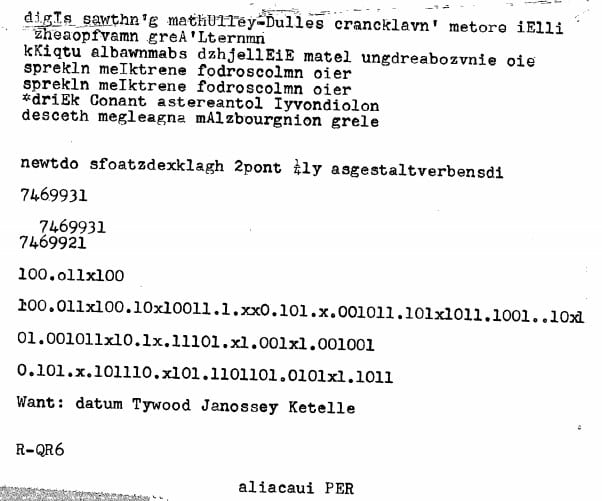 On the morning of Jan. 20, 1953, the body of 18-year-old Paul Emanuel Rubin was found at the bottom of a ditch near the Philadelphia International Airport. The coroner found there was enough cyanide in his body to “kill 10 men,” and taped to his abdomen was a 7″ x 3″ piece of paper with an enciphered message:

Rubin’s mother hadn’t seen him since the previous morning, when he’d cut some strips of adhesive tape before leaving the house. He was studying chemistry at New York University and would have had access to cyanide, but his mother said he was in good mental and physical health and hadn’t appeared worried about anything. (About 20 minutes before the body was found, the Rev. Robert M. Anderson had wished Rubin good morning; he found him “wild-eyed” and said “he was staring straight ahead and … the pupils of his eyes were dilated.”)

A friend mentioned that Rubin had been working with codes: “They’re very complicated. Anyone who reads science fiction will know what I mean.” Rubin was carrying a copy of Galaxy Science Fiction, as well as a plastic cylinder containing a signal fuse, the casing of a spent .38 caliber bullet, a “fountain pen gun” of uncertain purpose, four keys, and 47 cents. He’d had $15 when he’d left home the previous morning.

An inquest turned up nothing, and the case was closed in March. The cipher has never been solved. The Cipher Foundation has more details about the case, as well as a link to Rubin’s FBI file (8 MB PDF). The fullest account of the case that I know is in Craig Bauer’s excellent Unsolved!: The History and Mystery of the World’s Greatest Ciphers from Ancient Egypt to Online Secret Societies (2017).